The former Shanghai International Settlement (上海公共租界 or Shànghǎi gōnggòng zūjiè) was governed by the Shanghai Municipal Council (上海工部局 or Shànghǎi gōng bùjú) from 1854 – December 1941. The Shanghai Municipal Council (S.M.C.) was mainly controlled by the British although it was an international settlement with foreign residents from all over the world. Chinese were not permitted seats on the council until 1928. 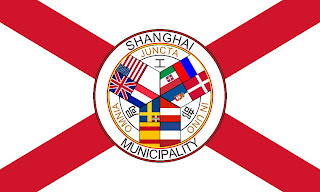 Shanghai's French Concession or La Concession Française de Shanghai [Changhai] (上海法租界 or Shànghǎi Fǎ Zūjiè) existed from 1849 until 1946. Much as it was in the Concession's glory days when it was considered by some to be the "Paris of the East", the former French Concession is still known for its romantic tree-lined streets and art-deco buildings. The French Concession was separate for the International Settlement and was responsible to the French Consulate General in Shanghai. 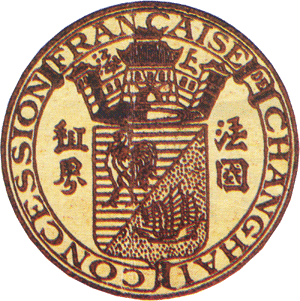 It's no secret that many of Shanghai's city parks were foreigner cemeteries during this city's colonial period. Some of these (now) parks still have a few old tombstones scattered about and hidden within them.

Throughout Shanghai's former French Concession manhole cover brakets with the letters CMF and a date can be found. CMF stands for Conseil Municipal Français. Other manholes with French words on them can also be found in the Concession today.

A small valve-cover was found imbedded in a sidewalk in the former French Concession with the word “Gas” printed on it in English.

The Shanghai Power Company (S.P.C.), controlled by American investors, began operating in August 1929 after the ratepayers (or tax payers/ land owners) of the International Settlement voted in April of that year to sell off the S.M.C.-run Municipal Electricity Department.
The first power company in Shanghai was the Shanghai Electric Company founded in 1882. In 1893 it was bought by the S.M.C. and operated as a government department (Municipal Electricity Department) until it was voted to be sold in 1929.
See Pictures >

Old telephone poles and manhole covers originally installed by the many telephone companies that operated in Shanghai during the former International Settlement’s and French Concession’s administration over the city can still be found today.
While determining the time frame and, subsequently, which company installed the telephone poles is difficult as there are no markings on the poles, manhole covers installed by the Shanghai Telephone Company (S.T.C.) can be easily identified as they are marked in English.
The original telephone company was the American-backed Oriental Telephone Company which, according to some accounts, was poorly run by its British managers in the city. The S.M.C. awarded Shanghai Mutual Telephone Company (which was a newly created company) the rights to take over the telephone market in Shanghai around the turn of the 20th century. The manager of this company was a man named Gustaf Öberg (more about him later as he is an interesting character and has a great story).
Shanghai Mutual Telephone Company controlled the Shanghai telephone market until S.T.C. was incorporated in 1929 by the American-based International Telephone & Telegraph Company - still operating today as ITT Corporation and listed on the NYSE. Once S.T.C. took over Shanghai Mutual Telephone Company it set out to convert Shanghai’s manual phone system to an automatic system. S.T.C., controlled by its American investors, serviced both the International Settlement and the French Concession. According to an online reference to an article originally published by the China Journal News in 1934, Shanghai's International Settlement and French Concession had a total of 50,588 telephones in use that year. This is compared to 34,700 users in 1930.
Now a quick bit about Gustaf Öberg (Born in Stockolm, Sweden 1850-1920). Gustaf Öberg was a Swedish marine captain based in Shanghai with his wife and two children. To make a long story short, Gustaf Öberg sold weapons to the Chinese when, between 1884 & 1885, France was at war with China. He was arrested by the French and sentenced to death. After his arrest his wife and children returned to Sweden. However, his death sentence was delayed and in June 1889 he escaped from a French-controlled prison in Indochina and disappeared (thought to be dead) until December 1892 when he contacted his wife wishing her a Merry Christmas and requesting that she return to Shanghai (via America) and reunite with him. He was later acquitted by a French court of his arms dealing crimes (after supposedly bribing an official to pin the crime on an already captured Chinese pirate) and then went on to rule the Shanghai telephone market.
For more information on S.T.C. and to see one of the company's American-issued bank notes from 1933 Click Here)
For more information on Shanghai Mutual Telephone Company Click Here)
For Gustaf Öberg's full story Click Here)
See Pictures >

The Shanghai Municipal Council’s (S.M.C.) Public Works Department (P.W.D.) was a subsidiary of the International Settlement’s government in a similar manner to the way the Shanghai Municipal Police (S.M.P.) force was. The initials S.M.C. & P.W.D. can still be found on many manholes throughout the former International Settlement even today.
See Pictures >

A special thanks to all of those that wandered ’s streets with me and independently in search of the items on this site.